The IEEE Workshop on Wireless LANs, begun in 1991, is the oldest IEEE workshop in wireless broadband local and ad-hoc networks.  This workshop has been organized every five years by the Center for Wireless Information Network Studies (CWINS), at the Worcester Polytechnic Institute, Worcester, MA.  The first IEEE Workshop on Wireless LANs was co-sponsored by WINDATA Inc, Northboro, MA, one the of leading WLAN companies at that time.  The aim of the first workshop was to increase the participants' awareness of the then-current and future direction of the Wireless LAN industry and to stimulate interaction among researchers, leading industry developers and end users. That year, the IEEE 802.11 standardization committee meeting was coordinated with the workshop and was held in Worcester, MA. 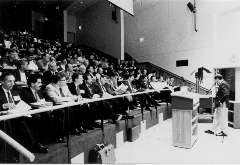 The technical program of the first workshop began with tutorials on the first day and continued on the second day with invited lectures by leading researchers in academia and industry. The workshop opened with a welcome by Dr. Raymond Picholtz, then chairman of the IEEE Communication Society.  The invited lectures began with an overview of wireless local networks, by Dr. Charlie Bass, one of the founders of Ungerman-Bass.  This lecture was followed by a lecture on existing regulations and standards, by Dr. Mike Markus, FCC chief engineer for the release of ISM bands in 1985.  The ensuing sessions concerned measurement and modeling of indoor radio and optical propagation, spread spectrum applications, and other emerging technologies.  At the end of the first and the second days, the workshop featured two panel discussion on the future direction of wireless LAN market and technology.  A number of pioneers in the Wireless LAN industry including Tom Freeberg, designer of Motorola's Altair system, Bruce Tuck, designer of the WaveLAN, Dick Allen, Prsident of Photonics, Greg Hopkins, President of WINDATA, and Vic Hayes chairman of IEEE 802.11, as well as prominent researchers such as Prof. Schilling, CCNY, Prof. Falconer, Carlton University, Prof. Kavehrad, University of Ottawa, and Prof. Kahn, of UC Berkeley, participated in this workshop.

The second IEEE Workshop on Wireless LAN was organized in 1996 to address the need for expansion of the WLAN market .  By then, the technology was relatively mature, a variety of applications had been identified, and chip sets were emerging in the market, but market growth was below  predictions.  This workshop was cosponsored by Wireless LAN Research Laboratory (WLRL), an industrial alliance between CWINS and DEC, Raytheon, Harris Semiconductor, Aironet, and Cushcraft.

The technical program of the second workshop also comprised one day of tutorials and one day of technical sessions, all presented by invited speakers.  The first day tutorials covered antenna design, security issues, available and future products, emerging IEEE 802.11 and HIPERLAN-1 standards, and regulations for 5GHz bands known at the time as SUPERNet (today as UNII).  The remainder of the first day was devoted to a tour of WLRL and the NSF/WPI wireless LAN testbed at WPI.  Day two opened with a welcome from Dr. Edward Parrish, President of WPI, and featured a presentation from R. Supnikat, VP of Corporate Research and Advanced Development, Digital Equipment Corporation (presented by Dr. Anton Dahbura), on research underway at DEC's Cambridge (MA) Labs.  This was followed with a presentation by Dr. Thomas Stanley, Chief Engineer of the FCC on emerging UNII unlicensed bands.

An executive panel, featuring Brian King, President of Proxim; Todd Smith, President of Aironet; Bruce Tuch, designer of WaveLAN; Paul Odlyzko, Chief Radio Architect, Motorola Radio Research Lab; gave participants the opportunity to hear what these industry leaders had in mind for the near future and beyond. Presentations on developments in Europe and Japan contributed to the international scope of the event.
Other interesting developments discussed at the Workshop included BBN's "BodyLAN," a development that paved the way for today's IEEE 802.15 and WPAN industry. A panel on interoperability demonstrated that wireless LANs can generate as much controversy as any other emerging technology. The second day concluded with a look at major applications for wireless LAN systems (including education, health care, and financial systems), and a detailed look at tools for performance monitoring and system- deployment under development at WLRL.  This second workshop also featured an exhibits program that included Aironet, ALTA Group, Cushcraft, Digital Equipment Corp., Harris Semiconductor, Jolt Ltd., and WLRL.

In 2001, the Third Workshop has been organized around the theme of the explosion of the new trends of location-aware local networks for wireless LAN-PAN-HANs , together with business development in this industry. With the expansion of the wireless LAN industry toward WPAN and WHAN, the field has become so large that relying only on a few invited lectures could limit the scope of the workshop.  Therefore, the organizers decided to issue an open call for papers and to increase the number of presentations. Thus the technical program of the Third Workshop includes four parallel sessions with sixty papers from ten different countries.

The first day of the workshop opens with a keynote speech by Edson D. de Castro, the founder of Data General, to demonstrate the emphasis on business development in the emerging wireless LAN industry.  Three panels of invited speakers will address chip development, market development, and product demonstrations.  Ten technical sessions will address important emerging technologies such as UWB, indoor geolocation, OFDM, Blueetooth, HIPERLAN-2, and performance monitoring , as well as user perspectives in this industry.